A few weeks ago I wrote about my first “non-medal” race. There were no bells and whistles, although I did enjoy helping myself to a Krispy Kreme doughnut at the finish line. Oh? Did I leave that part out? Tidewater Striders Distance Series – 6 Miles

Yesterday I continued the distance series and completed the 10 mile race at “Historic Fort Monroe.” I definitely want to return to Ft. Monroe and learn more about the history. I love living in an area that is so rich in history and Ft. Monroe was a beautiful destination.

It was an early start, but I am thankful one of my running friends Tara gave me a ride. I had everything set out the night before. I took notes in my nutrition class last week and practiced my long run/race food prep.

Before the race we stayed warm in the car jamming out to our favorite race tunes and making the occasional bathroom run. 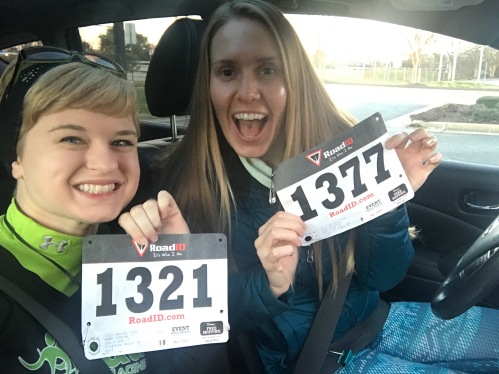 About 20-30 minutes before the start we ventured out so we could meet up with the rest of our wonderful Wolfpack and stretch out.

I started out with a group of Team Fearless (our 11minute pace group) until about the first mile. At that point we started to spread out. Tara went ahead and I thought Tasha went with her. I had been wanting to pace with Tasha since I adore her energy and don’t get to run with her very often. I sped up a little bit when I thought they both went ahead. It is so hard not to take off too fast at the beginning of the race, mile one was 10:41. Not as fast as my 6mile a few weeks ago, but I knew I had an extra 4 miles to conquer.

Mile 2-3 were TOUGH! I mean, the wind that day was brutal. Ft. Monroe is an island so we had the normal sea breeze combined with whatever else was going on. The temperature was 40 and I was dressed well, but that wind will knock the breath out of you. At this point it was just me and Cindy. Tara and “Tasha” were ahead and the rest of Fearless was behind me. Cindy is my long run hero. She pushed me last weekend during my longest run ever and she continued to help me find my strength during this race.

Finally… after mile 3 was the J&A water stop. I saw my coach and other J&A members. I heard their cheers and familiar greetings. Plus, the wind backed off a bit and every now and then it would even push us from behind. The rest of the race I was more confident in my pace and kept it under 11minutes and even tried for negative splits the last few miles.

It was a five mile loop, so we went around twice. This time we did a better job fighting the wind, but just like mile 2-3, miles 7-8 were a bit slower to fight the wind. Around mile 6 I learned that the vest I thought was Tasha was in fact not her and I felt pretty bad for leaving her behind. I would have happily ran her pace and stayed with the group. Their training plan has been different for our runs so I usually only get to run 1-3 miles with her and her “four pack.” Oh well!

Mile 9 I found my stride again. My foot numbness was gone, I passed the last water stop, I knew what to look for to show that the finish was near. Then we passed that 9 mile marker and I took off. I didn’t realize how fast I was going, because we increased our pace to pass a few people. I look down and we are doing a 9:20. I let up a little on the gas and we still finished that last mile in a 10:05. I had Fitz and the Tantrum’s Handclap playing and Cindy said she had Uptown Funk by Bruno Mars. I clapped with my song and she “ooooh”-ed to hers. The runner’s high kicked in and I felt amazing when I crossed that finish line. All the pain from mile 2-9 was gone and I could have kept on going! (I was also very thankful that I didn’t HAVE to keep going, there were a lot of people who were running a 15mile race on the same course.)

After the party I hung out and ate some food at the post race party and enjoyed the company of the team. The beer options weren’t anything to waste calories on, so I was very excited when Tara was on board to going to a local brewery to celebrate! Unfortunately the one we planned to go to was closed for another hour and a half, that didn’t stop us! We drove back to our lovely Virginia Beach and went to Green Flash where I enjoyed a brew that matched my jacket!

I can’t say I love running, but I definitely love racing and I love my team members. The love for running may still come in time. I am working on it… 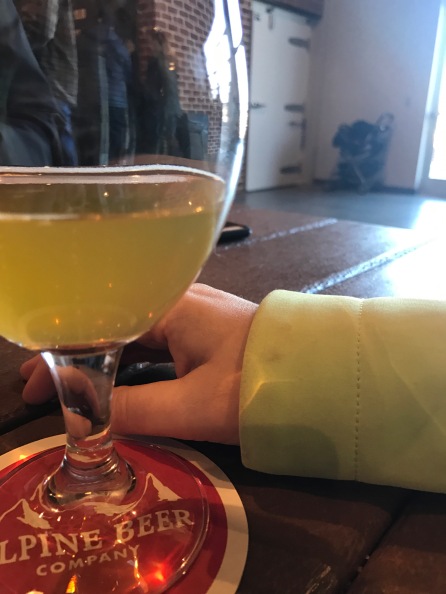 Thank you for visiting Rock Anne Run. I am a very passionate 20-something woman who first started running in 2016 as a new years resolution. One year later I decided to share my story through Instagram and this blog.
%d bloggers like this: